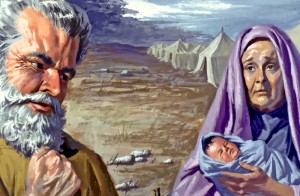 In chapter 35, the Lord instructs Jacob to return to the place where Abraham had built and altar and where he had made a vow to the Lord after he had been assured by the Lord that the promise to Abraham belonged to him and his descendants.  Jacob returns with a serious commitment to shun idolatry and to worship the Lord. He is keeping the vow he made at Bethel that if the Lord brought him back in peace, then the Lord would be his God and he would honor Him as Lord by giving one tenth of all he possesses.

Once again, the Lord reaffirms the Abrahamic covenant with Jacob, blesses him, and changes his name to Israel – the prince of God. Jacob consecrates a memorial at Bethel to mark this occasion.

He moves on as the bearer of the covenant promise. Yet he does so in the midst of the vicissitudes of life. One of Rachel’s nurses dies. His beloved wife also Rachel dies while giving birth to Benjamin. He experiences the joy of being reunited with his father and brother, but soon experiences sorrow in the death of his father, Isaac.

God is faithful to his promise to Abraham that He would bless his offspring and bring them to the land of promises. Yet, the story reminds us that every bearer of the promise eventually dies. We are left looking for One who will bear the promise and never die. Surprising when he finally comes, he does die, but in a grand reversal, He rises from the dead so that the promise to Abraham will live on forever.

New communities of covenant believers in urban centers often become Bethel-like experiences to many who have been running from God, chasing the wind, seeking to satisfy the idols of their hearts. Here you find many young people from Christian backgrounds who, like Jacob, seek to make their own way in life with only a marginal recognition of God. They come to cities lured by the hope that the emptiness of their souls can be filled by the many promises of urban life.

Often there is an initial encounter with the call of Christ, interrupted by the difficult challenges of life, and then followed by a renewed call to return to a place of renewed allegiance, forsaking idolatry and worshipping Christ alone.

For many who have struggled on their spiritual journey through broken relationships, disappointments, and betrayals, these gospel-centered city churches become their ‘Bethel,’ the place where they grasp the gospel, meet the Lord, and choose to worship and serve Him. Though they continue to struggle through the vicissitudes of life, they do so as those who now are recipients of God’s gracious promise in Christ.