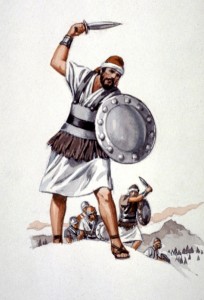 Genesis 36:1-37:1 record the descendants of the rejected line of Esau. The prosperity of both Jacob and Esau makes it difficult for them to share the land of Canaan so Esau chooses the higher elevation of what is later called Edom. Esau takes multiple wives one of whom is a descendant of Ishmael, perhaps an attempt to bring some unity to the two lines that were not heirs of the Abrahamic promise. The Edomites create their own alien kingdom to the kingdom of God in establishing themselves in a fortress like land and having a monarchy long before Israel would. 37:1 sets Jacob in contrast to the Edomites, for he dwells in the land of his father, Isaac’s sojourning, i.e. the land of promise.

Our immediate text only implies that there is a rivalry between the two kingdoms. The future history of Israel would reveal the innate resentment in the Edomites toward Israel. This came to its culmination at the fall of Jerusalem in 586BC when the Edomites sacked the First Temple. Later under John Hyrcanus the Edomites were forcibly converted and largely subsumed into Israel. One of the most notable Edomites was King Herod who enlarged and embellished the Second Temple.

In the gracious providence of God, there were some from Edom (Idumea) who followed Jesus during his earthly ministry (Mk 3:7-8). An irony of redemptive history is that many of the chosen line rejected Jesus while many of the rejected line followed Jesus. The election of Israel and the rejection of Edom served God’s purposes in redemptive history in giving Israel the privilege and opportunity to bring the blessing of Abraham to the nations, even to Edom. While Israel failed in that responsibility, Israelites, Edomites, and other Gentiles are being recreated as a new unified humanity in Jesus Christ.

While ministering among diverse people groups in the city it is natural to view some groups as more privileged and others as disadvantaged. There exists a great disparity of wealth and education and opportunity. Often this divide is along racial lines, yet prosperity and poverty are at times oblivious to race.  In cities we have the ‘Israels’ and ‘Edoms’ which on the surface may appear to be favored or disfavored by God. Yet, we are often surprised by the indiscriminate work of the Spirit who convicts both the favored and disfavored of sin and righteousness and judgment.