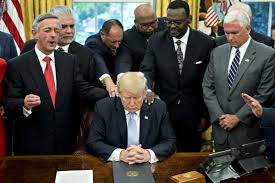 There is rising criticism against ‘evangelicalism’ for their alleged, unqualified support of the presidency of Donald Trump. The criticism often paints a sweeping portrait that is much too difficult to substantiate both because of the wide tent of ‘evangelicalism’ and the broad and debated definition of ‘who is an evangelical?’ The same difficultly applies to the word ‘Christian.’

It is common knowledge, that in 2016 many ‘Christians’ voted for Donald Trump believing him to be the best of three possible choices. They could have abstained from voting at all; they could have voted for Hillary Clinton, and some did; or, as many did, they could have voted for Donald Trump. Many did not take the first choice, though there may be a scenario where they would. Many did not vote for Hillary Clinton, nor for Barak Obama in either of their elections, because their moral stances on abortion, sexuality, and marriage were so clearly contrary to the Bible. Many voted for Trump, not only because he had an evangelical vice-president, but because his verbal commitments were anti-abortion, pro-family as defined by Scripture, and to our First Amendment rights of religious freedom.  Hopefully, Christians did not vote for Trump because they saw him as the savior of an American theocracy where biblical morality would be imposed by law and, thereby, a “Christian Nation” would be established.  Hopefully, they did not vote for Trump because they saw him as a model of Christian character and morality. God forbid, that Christians ever seek to emulate or imitate politicians or other secular leaders, as models of Christian spirituality and morality, rather than look to Christ and those in the church of Christ who imitate Christ and follow the example of the Apostle Paul.

I have Christian friends who voted for Obama and Hillary. Some of those friends, by their own admission, have capitulated to the pressure of the culture they live in and no longer see issues of abortion, sexuality, and marriage as biblical.  I have other Christian friends who also voted for Obama and Hillary and, though they still hold a biblical position on abortion, sexuality, and marriage, they see others issues as of equal or greater moral importance, such as capitalism, immigration, care of the environment, social justice, etc.

I pray for and challenge my first group of Christian friends who have succumbed to culture pressure, not because of whom they voted for, but because they’ve abandoned the authority of Scripture in issues of life, sexuality, and marriage.

I pray for and, when possible and helpful, I engage my other Christian friends on those issues that they see of equal or greater importance. Certainly, the Bible speaks about economics, immigration, care of the environment, and social justice. Personally, when it comes to economics, I happen to believe in limited government, personal property rights and a free market; I am against the governmental practice of confiscating wealth through taxation and redistributing that wealth through social programs. This position come from principles based on my understanding of Scripture. It is not a test of orthodoxy. If it’s helpful and not acrimonious, I can discuss this issue with my Christian friends who may tend more to socialism or other economic theories. I can also discuss immigration, care of the environment, social justice, etc. Personally, I see all of the above as the kind of debatable issues that Paul talks about in 1 Corinthians 8-10 and Romans 14.  Sadly, for some of my Christian friends, their stance on these ‘debatable’ issues is for them and others clearly the only biblical stance. They see them not only as important as abortion, sexuality, and marriage, but perhaps more important.

For Christians who support and promote and condone a morality that is contrary to Scripture, I pray for them and honestly question how they can affirm Jesus Christ as Savior and Lord, while rejecting the clear teaching of Scripture. Perhaps many have followed the errant path of Tony Campolo, who calls himself a red-letter Christian, accepting the teachings of Jesus, while not bowing to the authority of all of Scripture (2 Timothy 3:16-17).

Unfortunately, there is a greater challenge with Christians who have raised their view of what I call debatable issues to a test of Christian faithfulness. They judge the credibility of one’s profession of faith based on their views of economics, immigration, care of the environment, social justice, etc. I strongly disagree with them, but say with Paul, “Let every man be fully persuaded in his own mind” and “Everyone of us must give an account of himself to God.”

I do not know for whom I will vote in the 2020 election or if I will vote at all. My commitment to the gospel of Jesus Christ and the authority of Scripture has remained the same through Nixon, Ford, Carter, Reagan, Bush, Clinton, Bush, Obama, Trump, since I became a follower of Christ in 1970.  No president has ever given me higher hope or deeper despair in everyday life or about the future. Jesus Christ remains my greatest treasure and deepest delight.

Philippians 3:20 But  our citizenship is in heaven, and from it weawait a Savior, the Lord Jesus Christ, 21 who will transform our lowly body to be like his glorious body, by the power that enables him even to subject all things to himself. 4:1Therefore, my brothers,whom I love and long for, my joy and crown, stand firm thus in the Lord, my beloved.

THE TRANSFORMING POWER OF THE GOSPEL

How Does the Gospel Transform Us?

The question of how spiritual transformation takes place is perhaps one of the more perplexing questions of Christianity.

Misunderstanding the nature of spiritual transformation has disastrous consequences, such as pharisaical pride, dark despair, and even abandonment of Christianity. These sad consequences reflect either a neglect of the gospel or confusion on what the gospel actually is and accomplishes. A clear grasp of the gospel displaces pride, overcomes despair, and grounds one firmly in the love of God.

Losing the joy of the gospel and seeking a replacement joy through any experience of incremental transformation produces the disastrous consequences of pharisaical pride, dark despair, and even abandonment of Christianity. The only stable, constantly satisfying joy is the joy of the gospel.

Transformation receives its power in the gospel.

When transformation loses its dependence on the gospel, it easily becomes more about what we are doing to achieve a righteous life that reflects our spiritual disciplines than about what God is doing to produce a righteous life that reflects the power of the gospel. Certainly the Scriptures talk both about our obedience and God’s working in our life, but the primary focus of transformation is God’s working through the gospel to transform our hearts and minds. William Edgar describes God’s part very well:

“Only God can effect such a change… The great difference between self-generated transformation and biblical conversion is that God is the one ultimately at work to effect the change… The only way we can be transformed is by operating, in all areas of life, under the grace of God, who gives to all who believe in him unconditionally.”

The gospel is the fuel that sets aflame the fires of love and thankfulness which generate obedience to the will of God. Without hearts that are set aflame by the gospel, attempts at transformation remain only external and continue to produce the disastrous consequences of pharisaical pride, dark despair, and even abandonment of Christianity.

In our meditation on Scripture and listening to the Word, let us seek a prayerful dependence on the Holy Spirit that He would continue to unfold to us the glory of Christ in the gospel.

Only in this way can our outward obedience be the natural fruit of gospel transformation.

Transformation progressively reflects the person of the gospel.

One of the evidences of genuine conversion is that one’s values, beliefs, and behavior progressively reflect the values, beliefs, and behavior presented in the Bible. Spiritual transformation reproduces gospel values in our lives. Gospel values are values that are exemplified in the life, death, and resurrection of Jesus Christ. Transformation is the process of believers being recreated in the likeness of Jesus Christ as described in the following verses:

“Do not be conformed to this world, but be transformed by the renewal of your mind, that by testing you may discern what is the will of God, what is good and acceptable and perfect.”
-Romans 12:2

“And we all, with unveiled face, beholding the glory of the Lord, are being transformed into the same image from one degree of glory to another. For this comes from the Lord who is the Spirit.”
-2 Corinthians 3:18

“All Scripture is breathed out by God and profitable for teaching, for reproof, for correction, and for training in righteousness, that the man of God may be competent, equipped for every good work.”
-2 Timothy 3:16-17

Focusing on the glory of Christ in the gospel is never simply a ‘spiritual, naval-gazing exercise.’ Contentment in the joy of the gospel and dependence on the power of the gospel do not result in spiritual inertia.