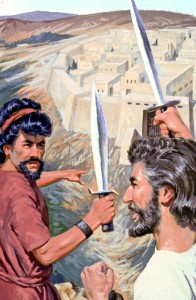 Genesis 34 is one of those sad chapters in the history of redemption.  Jacob’s daughter, Dinah, is raped, humiliated, and then treated like a commodity to be traded for mutual benefits. Jacob appears ready to make the exchange of his daughter for the benefit of prospering in the land – the land already promised to him by the Lord.

When Dinah’s brothers hear of the atrocity they first object because the Hivite’s do not bear the covenant sign of circumcision. It appears already that the covenant itself has become less significant than the sign of the covenant.  Pride of identity supersedes the blessing of relationship with the Lord.

The brothers create a ruse in which the Hivite men agree to circumcision and, while recovery from the surgery, they are slaughtered by Jacob’s sons. The brothers then plunder the city and take captive the women and children.

Jacob fears both disgrace and potential revenge from the other inhabitants of the land. Rightfully so, because they have failed to the covenant family that reflects the grace of God.

Though Jacob and his family are recipients of the covenant promise and though the sons bear the covenant sign of circumcision, it appears that cutting away flesh does not cut away the evil of their hearts. Jacob sons are worse than the pagans whom they destroy. They deceive; they take revenge; they murder; they steal; they are justified in their own eyes.  Instead of blessing the nations as the offspring of Abraham, they morally bankrupt, destroying rather than delivering the nations of the world.

Tragically, this story reflects the history of Christianity in the city. Christians who wear the new covenant sign of baptism often do so without having experienced the power of the gospel that transforms a sinner’s heart. They are religious, upholding the signs of Christianity, but bankrupt morally. They often are angry, bitter, unkind, and unmerciful.

The city of Philadelphia is peppered with religious edifices that stand as a sign of Christianity’s once magnificent presence in the city. However, the signs and symbols eventually became the substance, replacing the gospel of God’s grace in Jesus Christ. The signs and symbols lacked the power to overcome racism, injustice, and disregard for the poor and disenfranchised. The signs and symbols had no power to restore broken relationships or to deliver from life consuming sins. Without the gospel, these religious edifices soon succumbed to 12-step programs, conscience-relieving acts of mercy, and self-help seminars.

The city needs a resurgence of new communities of covenant believers who not only uphold the signs and symbols of Christianity, but who bear evidence of a life being transformed by the gospel of God’s grace – a life of indiscriminate forgiveness, mercy, generosity, and bountiful love.