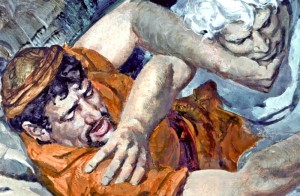 Genesis 31-33 tell the story of Jacob’s return to the land of promise. In the midst of his losing favor with his father-in-law, he becomes more aware of the favor that the Lord has shown Him. Yahweh speaks to him again and reminds Jacob of his oath at Bethel to serve Yahweh and to honor Him as Lord in giving Him one tenth of all that he has. Jacob is told to return to the land of promise.

The return to the land is fraught with misgivings especially in regard to the existing rift between Jacob and Esau. Also, without Jacob’s knowledge, his wife Rachel has stolen the idol images that belonged to her father and Jacob’s, as well, tricks his father-in-law by leaving secretly. Despite his and Rachel’s deceptions, the Lord in mercy preserves them and give them grace and a covenant of peace with Laban.

While on the way to Esau, Jacob stops at “the camp of God” and learns of Esau’s approach with a small army. In the midst of his fear, he finds assurance in remembering that the promise to Abraham is now his promise. That night he wrestles with a divine being and refuses to let go until the divine being blesses him. In the midst of Jacob’s struggle with God,  Jacob is transformed as is indicated as his name is later changde from Jacob (supplanter) to Israel (prince of God).  Furthermore, to both break Jacob’s hold on the divine being and to give him a lasting reminder of this life-changing encounter with God, the divine being dislocates Jacob’s hip. As Jacob’s limps away, every step reminds him of this night of powerful transformation.

Now as a humbled man, he reconciles with his brother, purchases property in the land of promise, and builds an altar to worship the God of Israel.

Jacob’s journey here is a journey of grace.  The Lord meets him in his fear and his deceit. The Lord comes to him, breaks him, transforms him, and renews his promise to him. This is the good news of the gospel.

Living in a restless and oppressive city, we often find ourselves in Jacob’s situation. The promise of rest in Christ often seems elusive so we tend to make our own way in life, employing means of self-protection, sometimes deceit, and plagued with the memory and fears of broken relationships. Yet, God persists in working in the midst of our troubles, allowing our waywardness to hurt us but not destroy us, and often working in our behalf though we do not recognize or deserve it.  His call is always to come back to the place of promise and rest.

On our journey He wants to bring us all to the place where we finally realize that our struggle with life and people comes from our struggle with God and our need to be broken and transformed by the power of God. Like Jacob, we need to see ‘the face of God” in Jesus Christ and limp away never forgetting the powerful grace of God that transforms sinners.