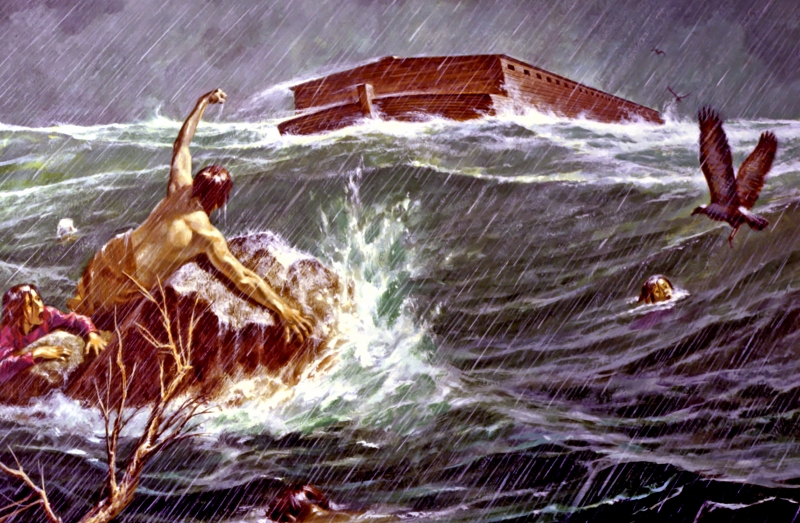 Genesis Six through Nine reveal the severe holiness of God and His particular mercy.  Noah from the godly line of Seth finds favor with the Lord. He is called upon to become a deliverer in the midst of a terrible judgment. The method of salvation (i.e. the flood and ark) dictated by God was curious, if not laughable, in a world of violence, rebellion, and godlessness. Noah obediently fulfills his calling and  also experiences God’s saving grace as God shuts him in the ark to protect him and then later remembers him to give him new life in a new world. An entire world perishes and a new world begins.

God in His grace establishes a covenant in which he promises the continuity of the world, despite its sin, until His purposes in redemption are accomplished.  God also establishes the rule of civil law in society for the protection of life so that society has the possibility of redemption, if not self-destructing through the kind of violence that existed prior to the flood.

But, even the new world shows its flaws at the outset. The human savior, Noah, and his family reveal the effects of the fall. Though he and his family worship, they fail to serve God in perfect trust and covenant faithfulness. Noah ‘s story leaves us looking for that Deliverer who will not disappoint us, not God – the Deliverer who will deal the final blow to evil and bring about a perfect world where the curse is gone forever.

Often urban life displays a similar disregard for God as did the world of Noah’s day, reflected in the violent crime that takes place. Today there is no less of a reason for God’s judgment on cities. Recently at a Police Clergy meeting, the Captain of the 19th Precinct commented on the percentage of decline in violent crime and murders. He then added, “But since the overall numbers are so large the percentage decrease is really insignificant.” Yes, there is enough violence taking place in urban centers that cry out for a similar flood-like judgment.

But God continues to keep his promise to Noah that he would sustain the created world until His redeeming purposes are accomplished. Meanwhile, urban church planting often happens in places that are less safe, but in desperate need of the gospel of God’s saving grace. The rescue takes place not from a devastating flood, but from the kingdom of Satan, sin, and death; the deliverer is not Noah, who would eventually disappoint us, but One called Jesus, who is holy, harmless, undefiled, separate from sinners, and now sitting at the right hand of His Father.