Satan unleashed his great fury in the death of Jesus only to have it recoil and crush the great enemy of mankind. 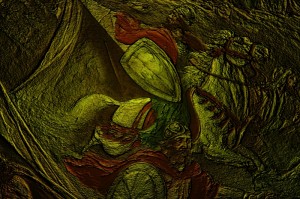 I love the celebration of Christmas especially when it turns my focus to the incarnation of the Divine Warrior who would come and rescue us from the kingdom of darkness. Though we may sing, “Silent Night, Holy Night, All is Calm, All is Bright,” our theology suggests that more than that was going on that night. Hell was raging. Satan was fuming. The demons were preparing for the greatest confrontation between the powers of evil and the power of God.

Way back in the Garden, God had ordained that hostility would exist between Satan and those whom God had created in His image to worship and serve Him. The Old Testament narrative portrays that hostility in the frequent attempts of various enemies to destroy the people of God. Time and again, Yahweh fights for His people and delivers them. He chooses warriors like Gideon and David who fight the enemies of God and His people.

As we read these narratives through the lens of the New Testament, we realize that a great spiritual hostility lay behind these physical battles between nations. The attempts to eliminate the people of God were designed by Satan to thwart the coming of that One whom God promised would come and ‘crush the head” of Satan.  The Lord’s sovereign and powerful interventions in behalf of His people renewed hope that the ultimate Divine Warrior would come and defeat the great foe of mankind.

Christmas is the birth of a King, a Warrior King, a Divine King. Though He is the Prince of Peace he comes, not to appease or accommodate evil, but to destroy evil and to crush the evil one.  He is born to defeat sin, Satan, and death.  The life and ministry of Jesus vividly portray the confrontations He had with Satan and the demonic world. Unlike the first Adam, Jesus comes through every time as one who triumphs over evil.

Satan was relentless in His attacks against this One who is called “the Son of God” and within the eternal plan of God is allowed to incite the mobs to kill Jesus. Death would be Satan’s final vanquishing of the Divine Warrior.  Death was Satan’s last and most powerful weapon to bring against Jesus. However, little did Satan know that God would use this powerful weapon of death to be the very means by which Satan himself would be defeated. Satan unleashed his great fury in the death of Jesus only to have it recoil and crush the great enemy of mankind.

14 Since therefore the children share in flesh and blood, he himself likewise partook of the same things, that through death he might destroy the one who has the power of death, that is, the devil, 15 and deliver all those who through fear of death were subject to lifelong slavery. (Heb 2:14-15 ESV)

“Up from the grave He arose with a might conquest of His foes. He arose a victor from the dark domain and He lives forever with His saints to reign. He arose. He arose. Hallelujah Christ arose!”