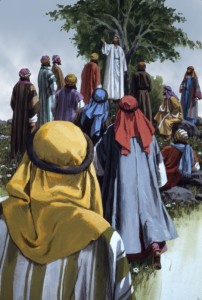 I Peter answers the question: How do we live as Christians in a non-Christian world? The ‘we’ is an important part of the question because the nature of Christian existence and witness is essentially corporate.  The book is about a chosen people and their struggle with the growing alienation they are experiencing.

Peter identifies these people at the outset using terminology that informs their present experience through the history of the Old Covenant people of God.  He calls them ‘elect exiles of the dispersion.’ As Israel in exile was dislocated from their land, the church experiences exile because their inheritance is not of this world. As Israel was dispersed among the nations, so the church is left to dwell among the nations of the world.

Their dislocation from their inheritance and their dwelling among the nations as strangers came about because of the work of the Holy Trinity in their lives. They are experiencing a new social setting, not simply because the setting has changed but, because they are becoming new in Christ.

Because they understand that this alienation and difference they are experiencing is due to what is happening within them, not because the world had changed, they are called to live respectfully and mercifully in the world.

They cannot be angry and hateful to a world that looks strangely at them because it is not the world’s fault. Actually, it is God’s fault they are different. And, this is a good thing.

God’s gospel work makes us exiles who now long for that eternal home. Yet, that gospel work places us strategically among the nations to model a new society of mercy and grace. The ongoing work of the gospel will neither allow us to isolate ourselves from the world nor will it allow us to fully immerse ourselves in the world.  We are called to be His people, never forgetting our eternal home while living faithfully among the nations.

2 thoughts on “ELECT EXILES OF THE DISPERSION”