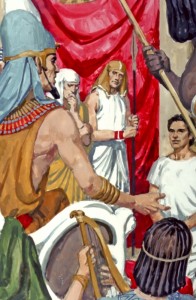 These chapters highlight the presence of God and His providence in the life of Joseph. Despite the injustice and betrayal of his brothers, Joseph experiences fresh grace which takes him through the trials of captivity and brings blessing to him in the midst of his troubles.

The Lord gives grace to Joseph to flee the seductions of a Potiphar’s wife; the Lord protects him while unjustly imprisoned, and eventually exalts him to the second highest position in Egypt.

The name of the LORD is advanced and honored among the nations, as Joseph experiences the presence of the Lord in his hardship and remains faithful to his God.

What Joseph experienced in his hardship through the presence of the Lord, anticipated the future gift of the Spirit through whom the promise of Jesus to His disciples is fulfilled, “I am with you always, even to the end of the age.”

Unlike Joseph, who was banished to Egypt against His will, many believers choose to live in the urban centers of the world, believing that the Lord who preserved, protected, and prospered Joseph in Egypt will do the same for them. As Egypt was an unlikely place to play a significant role in the history of redemption, so urban centers may also appear to be unlikely places for the advance of the gospel.