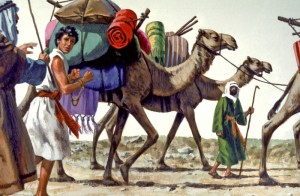 These chapters demonstrate the far reach of sin even among those chosen to bring blessing to the nations. The family disharmony that temporarily interrupts the advance of God’s purposes is eventually reversed by the gracious work of God.

Joseph is the son favored by his father yet envied by his brothers. In their jealousy, they revert to a vicious act of casting their brother into a pit, selling him into slavery, then telling their father that he was killed by an animal.

We also read of the blatant disregard for God’s moral standards in the accounts of Onan, Tamar, and Judah. We are saddened as we read, yet not shocked because the effects of the fall reach every one, including the people of God.

As we read this story, we wonder how those who have been graciously chosen of God to bring blessing to the nations can at the same time be so ungracious within their own family. We read these chapters with sadness, yet with faith in the covenant God who remains faithful. Our hearts ache in seeing the brokenness of the covenant family, yet we wait in faith knowing that the Lord is working even through the tragedies and the sin of His people.

The absence of grace in the brothers of Joseph reminds us that apart from grace there would be no chosen people to fulfill God’s purposes of bringing the blessing of Abraham to the nations.

The betrayal, rejection, and discarding of Joseph anticipate the suffering of Jesus who in His rejection offers deliverance to all of those who will believe in Him.

Unfortunately, the church in cities has often reflected a disharmony similar to the family of Jacob. Often divided along racial and economic lines, the urban church fails to reach the nations around it because it is captured by its own jealousies and, consequently, is unattractive to those who look in from the outside. When the covenant family fails to display the grace which it has received in the gospel it loses its power to be a blessing to the nations.

Cities need churches that reflect the grace of the gospel, which displays for us and in us the most passionate love, the deepest mercy, the most magnificent grace, the most underserving forgiveness. These are the churches that will bring the blessing of Abraham, i.e. the gospel, to the nations whom God is bringing to the urban centers of the world.