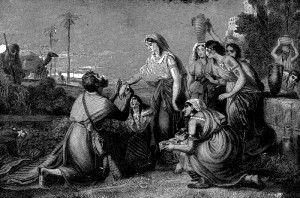 Genesis 23 – 25:11 record the story of the death of Sarah and Abraham and the transfer of the covenant promise to Isaac and the marriage of Isaac. Upon the death of Sarah Abraham purchases a burial plot in the Promised Land. Though he has not possessed the land of promise, he has sojourned there in life and will rest there in death. In order for the promise to progress beyond Isaac, God must graciously provide for him a wife through whom offspring will come and the promise to the descendants of Abraham will continue. Though Abraham remarries after the death of Saran and fathers numerous children, he gives all that he has to Isaac, the bearer of the covenant promise.

Such is the patient way of God in bringing about the fulfillment of his promises in the context of the realities of human life.  Abraham tastes the future both in the purchase of the burial plot and in the marriage of Isaac. Isaac also is comforted In the midst of the sorrow of death by the expectation of new life offered in his marriage to Rebecca.

These chapters continue the story of faith – looking for the ultimate fulfillment of God’s promises and longing for that ‘seed’ who would bring blessing to the nations of the earth. The taste of the temporal earthly promise of a land and seed kept Abraham looking for the greater promise – an eternal city which would be brought about by the quintessential seed of Abraham, Jesus.

Hebrews 11:13-16  13 ¶ These all died in faith, not having received the things promised, but having seen them and greeted them from afar, and having acknowledged that they were strangers and exiles on the earth.  14 For people who speak thus make it clear that they are seeking a homeland.  15 If they had been thinking of that land from which they had gone out, they would have had opportunity to return.  16 But as it is, they desire a better country, that is, a heavenly one. Therefore God is not ashamed to be called their God, for he has prepared for them a city.

In God’s providence and grace, by faith Abraham had a glimpse of the future, when God would bring about the fulfillment of his promise.

As we live and labor in the city, we seek to have the faith of Abraham. Like Abraham we have tasted of the world to come through our faith in the quintessential seed of Abraham, Jesus. He has come and inaugurated his kingdom which mysteriously covers the earth through the lives and congregations of those who have been redeemed. Yet, we long for the ultimate, consummate fulfillment of that kingdom.

The city offers frequent and at times harsh reminders that we are sojourners here. The city is marked by unsettledness, transience, and change. People come and go; neighborhoods experience deterioration and gentrification; landmarks are imploded and replaced often by less durable structure; once full church buildings lay nearly empty or vacant. In the Spirit of Christ we taste the perfect world to come; in the spirit of the city we taste the imperfect world that is

Yes, there are more stable and serene communities beyond the city limits. There are non-urban utopian places where the longing for heaven is quieted by the satisfying pleasures of earth. But we choose the city! We choose to live with the gnawing dissatisfaction and unsettledness of city life, while enjoying the Spirit’s down payment of the world to come and living with the expectation that we will one day live in the city which God is preparing for us.