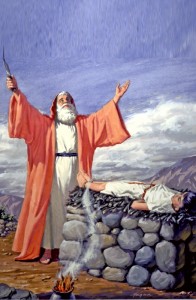 Abraham’s faith that God would bless the nations through his offspring is now tested. Isaac, the son through whom the promise will be fulfilled, has become for Abraham the visible evidence of that promise. The underlying question of Genesis 22 is this:  Is Abraham’s faith still dependent on the Word of God or is it now placed in the physical presence of Isaac? Is Abraham walking by faith or is he walking by sight?

Abraham is ordered to offer the son of promise as a sacrifice. Abraham, in obedience to the God who called him and believing that God would resurrect the son of promise, takes his son to the mountain top and lays him on the altar of sacrifice.  God prevents Abraham from slaying Isaac and graciously supplies a substitute sacrifice.

The promise of numerous descendants and blessing to the nations is confirmed again to Abraham.

Abraham models the faith of all true followers of Christ. He believed that God could raise the dead.

Hebrews 11:17-19   17 ¶ By faith Abraham, when he was tested, offered up Isaac, and he who had received the promises was in the act of offering up his only son,  18 of whom it was said, “Through Isaac shall your offspring be named.”  19 He considered that God was able even to raise him from the dead, from which, figuratively speaking, he did receive him back.

Like Abraham, our present actions are based upon our faith in God’s future actions. Furthermore, we live on the other side of Christ’s resurrection and are called to an even deeper faith. The God who has raised Jesus from the dead is the God who assures us that through faith we participate in His resurrection. Immediately through faith we receive new life in the inaugurated kingdom of Jesus and ultimately are assured of resurrected life in the consummated kingdom of Jesus.

The promised offspring of Abraham who would bless the nations has come. We are recipients of that blessing as well as mediators of that blessing to the nations. That is why followers of Christ eschew ethnic pride; they deplore racism and monoculturalism. Many believers today are reversing the white flight that abandoned cities for the safer suburbs. They realize that cities are where the nations of the world are congregating and that King, Jesus, is a king for the nations.  In most major cities today, you can literally obey the command of Jesus to “go into all the world and make disciples of all nations.”