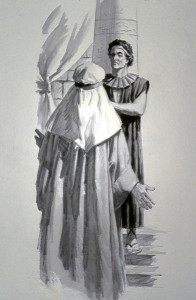 The promise of God to bless the nations through the seed of Abraham appears to be threatened due to the chicanery of Abraham and Sarah. In a faithless effort to preserve his life by hiding his marriage and telling a half-truth about Sarah his step-sister/wife, Abraham supposed he was preventing his death at the hands of a pagan king whom he assumed would have killed him for his wife.

Behind the scenes, the God of promise is faithfully at work bringing His promise to fruition. God is already at work in the hearts of nations whom the promise intends to include. Abimelech fears the Lord and upholds a moral standard that appears to be higher than Abraham’s at this point.  Furthermore, God in his sovereignty prevents Abimelech from taking Sarah as his wife and temporarily closes the wombs of Abimelech’s harem as a warning.

Abraham is rightly rebuked for his lack of faith; yet despite his faithlessness, God preserves him and even blesses him through the generous gifts of Abimelech.  His failure in faith does not detract from his responsibility as the heir of the promise to be a blessing to the nations, so in obedience to God, Abraham prays for the healing of Abimelech’s harem.  Abraham is somewhat embarrassingly forced into an uncomfortable act of intercession. One must wonder what kind of impact Abraham might have had at the outset had he been a man of faith.