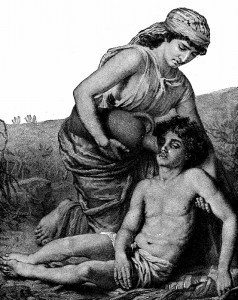 The promise of God to Abraham to create a new humanity through whom the nations would be blessed comes to fruition with the birth of Isaac.  In the midst of that joyous birth,the presence of Hagar and Ishmael appears to be a threat to Sarah who understands rightly that the promise of blessing to the nations comes through Isaac, not Ishmael. Under God’s direction,  Abraham sends Hagar and her son away. God provides for them and promises that, as the seed of Abraham, the line of Ishmael would also become a great nation.

Abraham settles a dispute with Abimelech, king of the Philistines, over a well in the Negev.  Abimelech concedes to Abraham ownership of the well and Abraham  makes a covenant with Abimelech affirming that the well, called Beersheba, belonged to Abraham.

Abraham worships El Elyon, the Most High God, at the well.  He now has a foothold in the land of promise, only a taste of the fuller promise yet to be fulfilled, for he is yet a sojourner in what is now the land of the Philistines.

Abraham , as we, lived between the times of inauguration and complete fulfillment. In the birth of Isaac and the digging of the well at Beersheba, the promise of a new humanity representing the kingdom of God is initiated, but not fulfilled. Even the initial taste of the promise is in the midst of struggle against adversaries like Ishmael and Abimelech.  Nevertheless, though God allows the struggle, He is faithful to His promises.  That initial taste of the promise encouraged Abraham to keep looking in faith for that ‘continuing city, whose builder and maker is God.’

Like Abraham, we live between inauguration and complete fulfillment. Even though our ‘taste’ of the world to come through life in the Spirit is real and satisfying in the inauguration of the kingdom of Jesus Christ, we yet long for the full and final expression of that kingdom in which the descendants of Abraham, both believing Jews and Gentiles, will enjoy the final ‘rest’ in the New Jerusalem.

Believers who live in urban centers perhaps are more aware of an ‘Abraham-like’ longing for that eternal city, as they experience the antithesis to that eternal city. Often the retreat to the suburbs is motivated by the pursuit of the ‘good life,’ a taste of heaven on earth. This retreat is often an escape from sin and its consequences rather than a calling of God to be ministers of mercy in a world that needs Jesus. Many believers in the suburbs already possess the ‘city’ they’ve longed for and have settled down quite comfortably with only a feint longing or memory of the continuing city whose builder and maker is God.

To live in the city is often a choice to forgo ‘having it all now’ knowing that the best is yet to come. City living may challenge you spiritually and make you more aware of the temporality of this life and that you are a sojourner in this world. Believers in the city are not seeking a utopia but a ministry among the nations from whom God is calling out a people for His name.