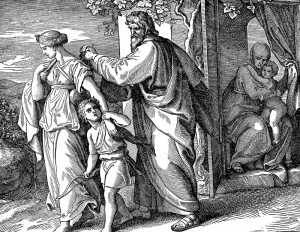 Genesis 16 and 17 tell the story of the Abraham’s struggle with faith as the promise of an heir is delayed.  In weakness of faith Abram and Sarai take matters into their own hands rather than wait upon God for what appears to be an unlikely promise, considering their age. Abram accomplishes his goal of having an heir by his concubine but this is not acceptable to God. Consequently, rather than obtaining a legitimate heir, Abraham’s faithless act results in the birth of a nation that would perpetually afflict the chosen descendants.

Despite Abram’s faithless act, God is His sovereign grace reaffirms His covenant with Abraham and institutes a sign for the covenant, an outward sign that would represent the inward faith of Abraham and his descendants. In circumcision, the foreskin of the male organ for reproducing life is cut away representing one’s saving faith in God’s power alone to cut away the sinfulness of the heart of man, from which proceed all the issues of life.

Both Abram and Sarai are given new names which represent God’s assurance of their fruitfulness in experiencing God’s promises, despite their recent act of faithlessness.  What a wonderful display of God’s grace!  It is God alone who insures that the promise of a redeemer will be fulfilled and will result in a multi-national seed of Abraham.

When God reaffirms His covenant with Abraham, He emphasizes that Abraham would be the father of many nations. Ultimately, according to Galatians 3 the fulfillment of this is not about physical nations but about those from the many nations of the world who place an “Abraham-like faith” in the quintessential seed of Abraham, Jesus Christ.

Church planting in urban centers has the potential to reflect this multi-national faith. Often urban churches become microcosms of the diverse gathering of nations before the throne singing ‘worthy is the Lamb’ (Rev 5:9-12). Instead of the cacophony that often exists in the gathering of alien nations, the gospel creates a vocal harmony accompanied by a symphony, singing and playing to the glory of the Lamb that was slain.