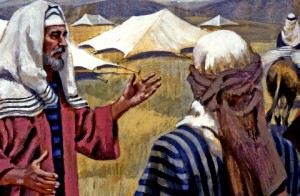 Genesis 14 begins to show the consequences of Lot’s choice to live by sight rather than by faith in the promise of God.  Along with others he is caught in the middle of a territorial war that results in his being taken captive. It falls upon Abraham and his small army of 318 men, armed with faith in God, to deliver him.

Abraham continues to show his faith in God’s promise and power to care for him. He does this in two ways.  He refuses any material reward from the King of Sodom, lest that King, and not God, would get credit for making Abraham prosperous.  He further gives one tenth of all he possesses to Melchizedek, a priest of the Most High God. Again, he demonstrates faith in God’s ability to provide and acknowledges Yahweh’s ownership over all his possession by paying a tithe.

Melchizedek, as we know from the Epistle to the Hebrews, foreshadows the greater high priest, Jesus Christ. Melchizedek acknowledges that Abraham is blessed by God and he blesses the God who blesses Abraham. He recognizes that the God of Abraham is not a provincial God (“Lord of heaven and earth”) and that He is the God who delivers.

As the fulfillment of what is shadowed by Melchizedek, Jesus not only affirms for us this dual recognition of Melchizedek but is Himself the embodiment of the God who is not provincial and who is the only deliverer.

The cities of the world overflow with people who pursue the economic opportunities lying therein. Yet like Lot, they often become captives to the allurement they pursue. The ‘King of Sodom-like’ promises to offer riches, even though obtained, cannot fill the void of the soul. Unwittingly, the hearts of urban dwellers long for a God who is not tied to a particular time and place, a God who truly delivers, not only from the temporal ills of this world, but from the enslavement of sin. Jesus is that Deliverer.

Acts 4:12   12 And there is salvation in no one else, for there is no other name under heaven given among men by which we must be saved.”