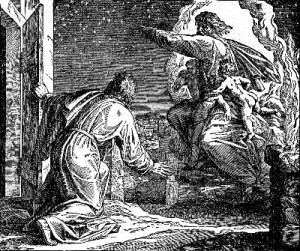 Genesis 13 shows the sincere trust that Abram had in the promise of God. He is set in contrast to Lot who walks by sight not by faith. Abraham builds altars and worships the true and living God wherever he goes. Lot fixes his eyes on what appears to prosper him in this world. Lot makes his own way in choosing through the eyes of human wisdom while Abram walks in simple faith. Lot in his choice moves dangerously close to the ensnarement of sin; Abram in his choice comes to a sacred altar where he worships.

In response to Abram’s faith, God reaffirms the promise of land (i.e. a kingdom) to Abram and his descendants..  The temporal land of Canaan becomes a foretaste of the eternal inheritance that awaits the people of God. Abram pitched his tent there, but not permanently. He looked for the eternal city and rejoiced to see the day when the promised Redeemer would come.

The descendants of Abram, though initially appearing to be ethnically defined, are eventually identified both in the Old Covenant and the New Covenant as those who have the same faith of Abram in the Creator Redeemer.

Abram worshipped God because he believed His promise of the gospel. The promise of gospel is now being fulfilled in Jesus Christ’s incarnation, death and resurrection, his enthronement, and perhaps soon, His coming.

It is not hard to empathize with Lot. The cities of this world are alluring. Though they give ample evidence of the fall and the darker side of humanity, they also remind us that though the image of God in man is effaced, it is not erased. Human beings, despite the fall, continue to demonstrate their ability to be creative in their development of business, arts, architecture, sports, media, etc. The best of human culture often found in cities makes them attractive. The diversity and density of people add to the flavor and allurement of the city.

We can choose the city, like Lot did, for all the wrong reasons. Cities are full of younger and older people who followed the attraction only to look more deeply into the emptiness of their soul. The sights and sounds, the bustle and hustle, the density and diversity eventually only amplify the lonely cry of the soul.

This is what makes cities such an inviting place for the gospel. People have access to the best and worst of human culture, yet their soul searches for more. As Augustine said, “Thou has made us for thyself; and our souls will never be at rest until they rest in Thee.”

At Grace Church of Philly, we hear the cry of empty and lonely souls, searching for the rest that only the gospel can bring.