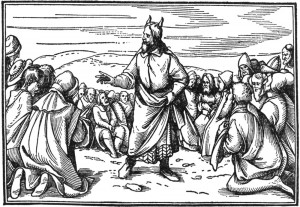 In Exodus Five and Six we are reminded that the promise of redemption is difficult to hold on to in the midst of suffering. When Moses seeks permission from Pharaoh to worship God, Pharaoh responds by increasing the burden upon the people of Israel. What at first appears to be a promise of deliverance turns out to be the cause of greater suffering.  God never seems in a hurry to alleviate or eliminate the suffering of His people.  Consequently, the burdens of everyday life for the people of God became overwhelming, resulting in their deafness to the promise of God. “ … but they did not listen to Moses, because of their broken spirit and harsh slavery” (Exo 6:9 ESV). Moses’ leadership becomes suspect in the eyes of the people, Moses’ faith is challenged as he is perplexed about God’s ways, and Moses’ call becomes uncertain – “”O Lord, why have you done evil to this people? Why did you ever send me?” (Exo 5:22 ESV).

The Lord seeks to strengthen the faith of Moses by reminding him of who He is and of the promise that He gave to Abraham.  After mentioning briefly the genealogy of the two oldest sons, the lineage of Moses and Aaron is given. The author shows the importance of Moses and Aaron’s leadership in displaying the fullness of their genealogy in comparison with the brevity of the older brothers.  Nevertheless, Moses remained reluctant to be God’s spokesman as he was aware of his sinfulness and weakness (uncircumcised lips).

The themes of promise, suffering, and deliverance are gospel themes repeated throughout Scripture. Faith in God’s promise is often tested in suffering and suffering is often the prelude to deliverance. Eventually, Jesus himself would be tested in suffering and would be delivered after suffering. His faith did not waver- “when he suffered, he did not threaten, but continued entrusting himself to him who judges justly” (1Pe 2:23 ESV). Unlike Moses, Jesus never resisted being the Word of God to a needy world.

Being God’s witnessing community within the city may arouse angst like Moses standing before Pharaoh. In his self-reflection, he was only a shepherd-leader of a powerless people coming before one who appeared to have the power of life and death. Though Moses had heard the promise of God and was assured of His presence, he wavered in his faith. The cry of his own fears drowned out the voice of God and the cries of those suffering under oppression. His fear left him impotent.

Like Moses we may be aware of our inadequacies and sinfulness. Yet, we too have heard the promise of God and seen His power in the resurrection of His Son. We are assured of His presence – “And behold, I am with you always, to the end of the age” (Mat 28:20 ESV).

Do you hear the cries of those suffering under the bondage of oppression? Will you hear the promise of God‘s sufficiency so loudly that it drowns out the debilitating fears of your own inadequacy? 20 Now to him who is able to do far more abundantly than all that we ask or think, according to the power at work within us, (Eph 3:20 ESV).