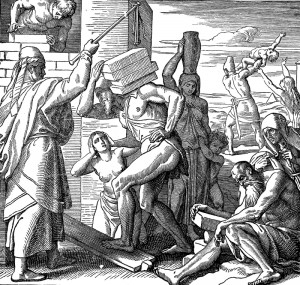 In Exodus Two we see again how the Egyptians are threatened by the prosperity of God‘s people rather than seeing the blessing on Israel as a blessing for the Egyptians. Consequently, the people of God are oppressed and an attempt is made to prevent population growth by slaughtering male infants. However, God graciously strengthens the hearts of two of the Hebrew mid-wives. Because they fear the God of Israel, they respect and preserve human life, despite what consequences might come for disregarding Pharaoh’s order. As an act of further grace toward the midwives, God causes them to prosper along with the rest of His people. In a desperate response, Pharaoh orders all of his people to destroy any male infants.  Though God’s people suffer under oppression, they yet continue to experience the blessing of God. He preserves them and ultimately will deliver them. The experience of Israel here foreshadows a similar event in the birth of Jesus Christ who also was seen as a threat to those in power. God delivered Jesus from the power of Herod. However, in contrast to ancient Israel, who though delivered from Egypt failed to become a blessing to the nations, Jesus is delivered and becomes the Deliverer of all who will acknowledge him as Lord and Savior.

Those ministering in urban settings, and elsewhere, often experience a mix of oppression, suffering, blessing, deliverance, and failure to fulfill their calling of blessing the nations through the gospel. Without a firm hold on God’s promises, believers can become confused, discouraged, and defeated.  Hard times can blind God’s people to their calling. Suffering may bring about a kind of self-absorption that eradicates concern for others. Yet often rising out of the foggy mist of despair are those like the midwives who stand up and stand out, as beacons of faith and faithfulness. They continue to fear God, worship Him, and serve others. This kind of faithfulness is not natural but neither is the power of God’s grace. May the unnatural power of God’s grace create an unnatural faithfulness in us.