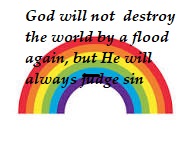 God created the rainbow. God gave humanity the rainbow. He defines the meaning of the rainbow. The rainbow is a solemn reminder of God’s severe judgment on a world that had rebelled against Him and a beautiful symbol of God’s mercy and grace in delaying judgment on our current world.

Our world today is no less deserving of complete destruction than the rebellious world of Noah’s day. Yet, in mercy God allows us to live. We should not mistake that God’s delay in judging sin is an approval of sin. That was a dangerous mistake made by some in the First Century. Peter spoke to that distorted thinking:

2Pet. 3:1   This is now the second letter that I am writing to you, beloved. In both of them  I am stirring up your sincere mind by way of reminder, 2  that you should remember the predictions of  the holy prophets and the commandment of the Lord and Savior through your apostles, 3 knowing this first of all, that scoffers will come  in the last days with scoffing,  following their own sinful desires. 4  They will say, “Where is the promise of  his coming? For ever since the fathers fell asleep, all things are continuing as they were from the beginning of creation.” 5 For they deliberately overlook this fact, that the heavens existed long ago, and the earth  was formed out of water and through water  by the word of God, 6 and that by means of these the world that then existed  was deluged with water and  perished. 7 But by the same word  the heavens and earth that now exist are stored up for fire, being kept until the day of judgment and  destruction of the ungodly.

In God’s wise and sovereign plan, He will one day destroy this rebellious world, not by water, but by fire. It is ironic that the rainbow is usurped as a symbol of gay pride, when in reality it is a warning of judgment and an offer of mercy. God’s patience and mercy is evident in that He allows those in rebellion against Him to claim the rainbow as the symbol of their diverse sins. Nevertheless, the rainbow remains as His warning of judgment and His present offer of mercy.

When Jesus returns and judges this world, the rainbow will be gone along with gay pride. God’s offer of mercy will be retracted. Today, when you see the rainbow, fear God’s severe judgment and accept His offer of mercy through our Lord Jesus Christ.

2Pet. 3:8   But do not overlook this one fact, beloved, that with the Lord one day is as a thousand years, and  a thousand years as one day. 9  The Lord is not slow to fulfill his promise  as some count slowness, but  is patient toward you,   not wishing that any should perish, but  that all should reach repentance. 10 But  the day of the Lord will come like a thief, and then  the heavens will pass away with a roar, and  the heavenly bodies  will be burned up and dissolved, and the earth and the works that are done on it will be exposed.

The White House proclamation on June as ‘gay pride month’ is a call to mourning, prayer, and an increased counter proclamation of the gospel of Jesus Christ. Philippians 3 warns followers of Christ about the destructive end of those “whose god is their appetite and whose glory is their shame.” The White House proclamation is a proclamation of what is sinful, shameful, and blatant rebellion against God. Because we love the LGBTQ+ community, we mourn for them, we pray for them, we call them to repentance and deliverance through faith in Jesus Christ. We pray for the repentance or removal of those who lead any nation down a path of immorality and rebellion against the Triune God, the only Creator and Redeemer.

The most loving thing we can do is to humbly repent of our own sin, proclaim the law of God which exposes and condemns sin, and share the gospel of Jesus Christ which alone offers grace, mercy, eternal life and transformation.