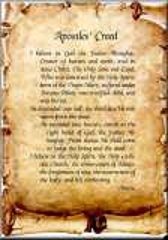 Why we use the Apostles’ Creed at Grace Church of Philly


From time to time I hear concerns from well-meaning people questioning our use of the Apostles’ Creed. Most often it has to do not so much with the content, but with their personal history of having recited it in the Roman Catholic Church or a liberal denominational church.  Part of their conversion story is that in understanding the gospel of salvation by faith alone in Jesus Christ, they left a religious system that had corrupted and confused the gospel. We rejoice with them in their conversion and their choice to leave a faulty religious system.

However, in our use of the Apostles’ Creed and other ancient creeds we are reclaiming from corrupt religious systems what belongs to historic Christianity.  The content of the creed is thoroughly biblical and generally accepted by evangelicals around the world. Though there are some nuances of how one understands ‘he descended into hell,’ most would agree there is a biblical basis for the idea. We choose in our recitation to omit it. Others are offended with the phrase ‘holy catholic church’ because they mistakenly associate ‘catholic’ with Roman Catholic. Actually, catholic is a good word that highlights the universal, worldwide expression of the church of Jesus Christ.  We replace ‘catholic’ with Christian to accommodate some of those sensibilities and misunderstandings.

The creed simply sets forth an ancient, historic representation of the Christian faith. It does not set forth how one becomes a Christian. Yes, it is possible to believe and recite the creed and not be a Christian, just as it is possible to recite the Lord’s Prayer or pray a ‘sinner’s prayer’ and not be a Christian. Nevertheless, the creed is helpful as a catechetical tool for believers but only secondarily as an apologetic tool for unbelievers.  We understand that both believers and unbelievers need more than the creed.

Admittedly, though we recite the creed regularly at Grace Church of Philly, we are not totally satisfied with the creed – not because of what it says but what it does not say.  Had I been on the ‘creed editorial committee,’ I would have made the atoning work of Christ clear. For some reason I was not invited to that committee.  Here at Grace Church of Philly, we are committed to being gospel-centered. The gospel is the good news that Jesus the Redeemer-King has come. At the heart of the good news is ‘Christ died for our sins.’ Since there is no substitutionary atonement in the creed, there is no preaching of the gospel in the creed. That is why I say that the creed is primarily a catechetical tool for believers not an apologetic tool for evangelism.  It is both a personal and corporate confession and a teaching tool for those who already understand and believe the gospel.

In contexts where the gospel has been eviscerated, the Apostles’ Creed is nothing but vain repetition, as is the recitation of the Lord’s Prayer and the singing of “Holy, Holy, Holy” by many Roman Catholics, many Orthodox churches, and all theological liberals. But, in contexts where the saving gospel of Jesus Christ is central, the creed reaffirms elements of the historic Christian faith.  When recited by those whose hearts are being transformed by the gospel, the Apostles’ Creed becomes a hearty, personal and corporate confession of Christian belief, not vain repetition.