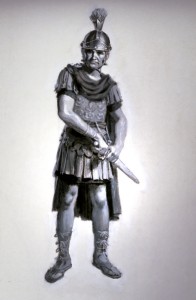 A Christian living in the first century faced the challenge, as we do, of how to live as a Christian in a non-Christian world.  Those whom Peter addressed in Asia Minor were mindful that they were aliens of the dispersion, i.e. their loyalties belonged to the kingdom of Jesus, yet they were temporality dwelling in this foreign world as His people.

The Roman government was not a model of justice and increasingly it became oppressive toward Christians. The institution of slavery, though having a legitimate legal purpose for the payment of debts owed to society, had also become exploitative and oppressive. Even the husband-led structure of marriages had degenerated to the abuse and oppression of women.

Christians found themselves in situations where the natural response of the heart would be to either overthrow the institutions of society which had become corrupt or escape from these institutions to a safer place.

Strikingly, Peter offers direction to believers that overturns human expectations, opening up a new way of thinking and acting.

Peter does not see how resisting and overturning the structures of society can be good for the advance of the gospel.  Christians are to be known for having a spirit of submission to those who are over them, even when the exercise of that authority is oppressive.

Citizens, slaves, and wives who live in the midst of less than ideal circumstances are encouraged to stay where they are and to keep doing what is good.  Peter offers the same answer to the evil that oppresses us as Jesus did:  27 “But I say to you who hear, Love your enemies, do good to those who hate you, 28 bless those who curse you, pray for those who abuse you (Luke 6).

‘Doing good’ is more than private morality. It is a persistent public goodness in the face of evil.  Christians are not to be known as rebels, revolutionaries, ‘anti’-everything. Peter would tell Christians in 21st Century America to discard their party line politics and to do good for the benefit of all people.  He would tell them come out of their isolation where they’ve retreated to safe and to engage the wider society with exceptional good works. Believers are to live with a spirit of submission and a commitment to persistent good deeds that benefit the society in which they live.  Their persistent goodness defies the false accusations often made against them.

Sadly, too often the energy that goes into resisting and working to overturn the abusive structures of society eviscerates the call of Jesus to love, do good, bless, and pray. Also, when Christians retreat into the safety of their cocoons they fail to be the salt and light that enables society to see their good works and glorify their Heavenly Father. The method for advancing the kingdom of Jesus is contrary to the world’s method. Instead of resisting or escaping, Christians are called to incarnate gospel values in the midst of the evil they face.

To live in such a way calls us to a deeper faith and reflection on the cross. This is where Peter takes us. Our hearts resist living God’s way because we find it difficult to believe that submission and persistent goodness can accomplish anything. Peter says, “Look at the passion of Jesus Christ.” Jesus is the example of non-resistance, submission, doing good, blessing, praying, loving, and obeying even to the death of the cross. And, what did it accomplish? – The redemption of the world.  The model of the cross is the pattern for how we engage the structures of society that often become oppressive.

Rejected, not a complaint

He is my Savior.

He is my Savior