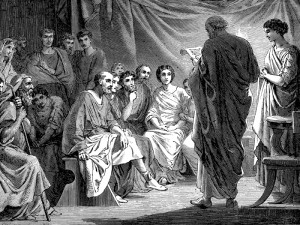 ‘catholicity ‘(small ‘c’) is used in at least two ways among non-Roman Catholics: 1) the spiritual unity of the universal church, i.e. the unity of all believers in the gospel of Jesus Christ; 2) the continuity of a particular church group with the apostolic church. Wikipedia offers this explanation of the second definition of catholicity:

The Eastern Orthodox, Oriental Orthodox, Anglicans, Lutherans and some Methodists believe that their churches are catholic in the sense that they are in continuity with the original universal church founded by the Apostles. The Roman Catholic, Eastern Orthodox, and Oriental Orthodox churches all believe that their church is the only original and universal church. In “Catholic Christendom” (including the Anglican Communion), bishops are considered the highest order of ministers within the Christian religion, as shepherds of unity in communion with the whole church and one another (http://en.wikipedia.org/wiki/Catholicity).

Wikipedia could add to the list of those who lay claim to apostolic continuity certain groups of Baptists, such as Landmark Baptists. Having been at one point in my ministry an adherent of the “Trail of Blood” mentality, I understand the desire of a particular group to be the ‘one true expression of the apostolic church.’ Unfortunately, this desire is most often rooted in human pride, rewritten history, and sparse exegesis of the Scriptures.  In seeking to establish and maintain the ‘catholicity’ of any particular group, true catholicity, i.e. the spiritual unity of the universal church, is undermined.

True catholicity is brought about by work of the Holy Spirit who brings all believers into union with Christ and therefore with each other. True “catholicity’ is determined by the gospel and those essentials of Christianity that undergird the gospel, such as expressed in the Apostle’s Creed.

The external experience of true catholicity must be incarnational not institutional. By incarnational I mean that believers must embody gospel-centered values that bring the reality of Spirit-created catholicity into Christian practice. Where the gospel and gospel values are central in the lives of believers, then despite denominational and institutional differences, there arises a commitment to practice the reality of unity that already exists, i.e. the spiritual unity of all believers. When the gospel is central and gospel-centered values are embodied, then the external expression of catholicity becomes possible and is pursued wherever and whenever believers cross paths. Gospel-centered values make catholicity a practical reality both locally, cross-denominationally, and globally.

On the other hand, genuine catholicity is not against denominations. There are many benefits to belonging to a larger group that has a worldwide institutional presence and ministry. Nor is genuine catholicity in conflict with one’s commitment to a local church that has an institutional presence and ministry in a particular locality.  There are denominations and local churches that maintain a doctrinal distinctiveness while expressing a gospel-centered catholicity to all believers. In these types of denominations and churches, there is no claim to be the sole representative of apostolic Christianity. Rather there is an adamant gospel-centeredness, a humility that accompanies the pursuit of doctrinal clarity, and a desire for incarnational gospel-centered unity in the universal church.

While we presently struggle with our own sinfulness that hinders catholicity, we seek God’s grace to live peaceably with all men, especially those of the household of faith and we long for the ultimate external expression of catholicity at the resurrection day when all believers gather before the throne of Jesus and with one voice worship Him.

Revelation 5:8-10 8 And when he had taken the scroll, the four living creatures and the twenty-four elders fell down before the Lamb, each holding a harp, and golden bowls full of incense, which are the prayers of the saints.  9 And they sang a new song, saying, “Worthy are you to take the scroll and to open its seals, for you were slain, and by your blood you ransomed people for God from every tribe and language and people and nation,  10 and you have made them a kingdom and priests to our God, and they shall reign on the earth.”

One thought on “‘catholicity’ – Institutional, Incarnational, or Impossible”